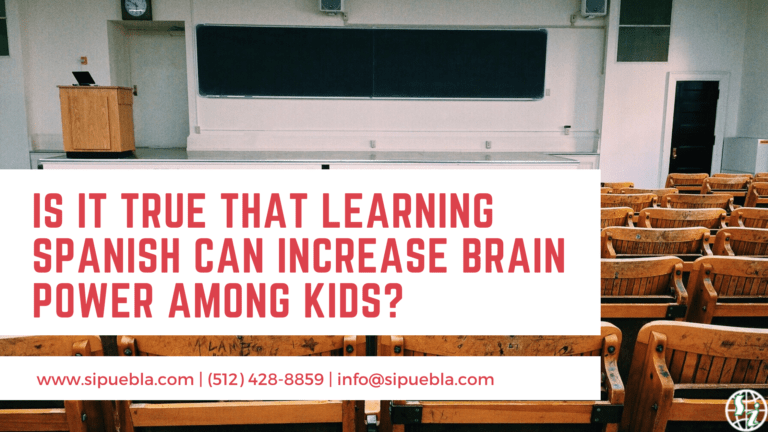 Spanish immersion courses have multiple benefits that can result in impressive outcomes. Research has shown that learning a second language like Spanish can improve academic success, along with increased future salary.

But besides this, it is said that kids who are enrolled in Spanish immersion schools have enhanced brainpower. Many researchers state that bilingual children are more intelligent with increased brain size.

Children proficient in two languages, especially Spanish being one of them, are more likely to be smarter than others with better reading skills in adulthood.

In a survey by Thomas Bak from the School of Philosophy in Edinburgh, United Kingdom, 853 children were tested in 1947; this statement has been actualized. The same test was done again in 2008 and 2010 for clear comprehension. In all the tests, the bilingual adults performed far better in intelligence and reading skills than expected.

You would be astonished and surprised to know that in another survey, it is revealed that bilingualism increases “gray matter,” which is the number of cells in the brain. People who can speak English, as well as Spanish, for instance, are likely to develop more brain cells than those individuals who can only speak one language. This also suggests that kids who get enrolled in Spanish immersion schools and learn the language will have a healthy brain with better brain power in their coming years.

Another thing that means to be considered is bilingualism also has an effect on something called “white matter,” which is the fatty substance covering axons.

According to some researchers, bilingual experience positively impacts various parts of the brain that develop the overall individually in certain aspects. The prefrontal cortex (responsible for planning, abstract reasoning, and problem-solving), anterior cingulate (partially functions for impulse control and emotion along with cognitive actions), and bilateral supramarginal gyri (partially helps in linking words and meanings) are some of the parts where the effectiveness of learning a new language like Spanish is seen.

Increased size of the brain

People who get enrolled in a Spanish immersion school to learn a second language could increase their brain size. This study has also been reviewed by a Swedish group of researchers with the help of Magnetic resonance imaging (MRI) and electrophysiology that helped to study the visible effects of learning a foreign language on the brain.

The study depicted that there is an increase in the volume of specific parts of the brain when learning foreign languages like Spanish. Certain areas of the cerebral cortex, as well as the hippocampus, are seen to be developed in size.

Learning Spanish from a renowned school can help your kid to improve and develop his brain that can result in impressive outputs in the future. The above post includes all the things that you need to know about the development of the brain by learning a new language.

The Spanish Institute of Puebla is the best Spanish immersion school with students from all across the world. Being located in one of the most beautiful cities of Mexico, the language school strives to introduce the students to the Spanish language as well as its culture, along with polishing their speaking, reading, and communicating skills.