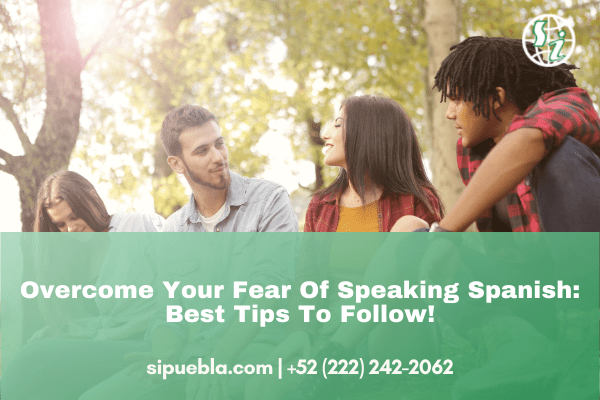 Learning a foreign language is as daunting as it sounds. With speaking a new dialect, people find a lack of words that can help them express themselves. This is hard for the learners to put a face of dignity while being incredibly critical of the abilities they have for speaking the language as they feel that the other person is judging their mistakes.

This massive change is not simple and can be scary for most. Especially when it comes to Spanish, people have to make sure that the pronunciation is absolutely right to convey whatever they are saying.

However, it is a fact that you will never be able to progress unless you venture out in social situations and circumstances where you can actually communicate with people who can help you correct your mistakes.

So, keep in mind that there is nothing to fear! Below we have made a list of a few ways by which you can overcome your fear of speaking Spanish and communicate with others with dignity.

Spanish immersion program in Mexico is the best way to learn the language from experts who have the use of knowledge and skills in teaching crucial aspects of the language.

The Spanish Institute of Puebla is the most reputed and renowned Spanish language school in Mexico, with a curriculum that is specifically designed for students across the world to learn the language in the most efficient way. Besides that, our program involves group discussions and interaction with native Spanish speakers to improve the speaking skills.

It is a fact that even the most experienced speakers feel Intimidated while speaking Spanish. This is why it is important to understand that fear is a part of life, and you have to regularly make an effort to master this. So, start taking small steps by leaving your comfort zone and significantly advancing your skills of speaking the foreign language of Spanish. The best way you can do is to communicate with native speakers and practice till the time you realize it’s no big deal after all.

Spanish learners have to keep in mind that they need to practice the language in their day-to-day life along with their Spanish immersion course in Mexico to create the confidence of speaking it in public.

The only way by which you can do so is by embracing the language and making the process more enjoyable and convenient. Start with avoiding the grammar and try to speak the common words. Some of the other things that you can do are listen to Spanish music and podcasts and watch Spanish movies and TV shows.

Learning Spanish is a troublesome task, especially if you do not know how to speak it right. This is the reason why there are Spanish immersion programs in Mexico that are specifically designed to assist students in learning the language in the best possible way, emphasizing the speaking and communicating abilities.

The Spanish Institute of Puebla ensures to offer you the best Spanish learning experience in Mexico with skilled and proficient professors. Get in touch with us now at (512) 428-8859 to enroll yourself or find out more about our program!