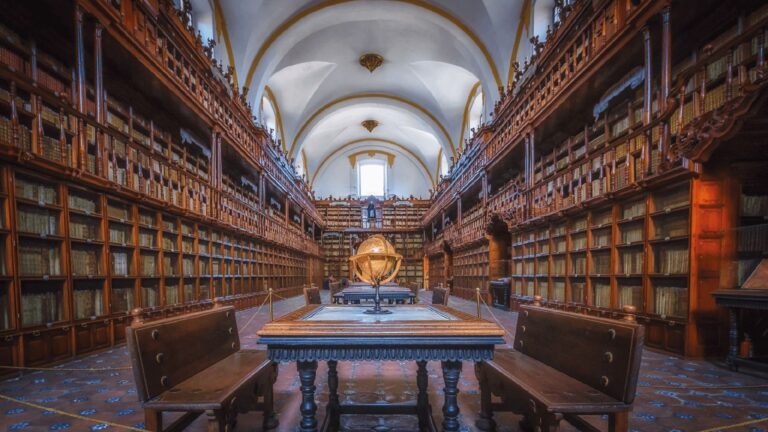 The Palafoxian library is a bibliographic enclosure of the City of Puebla, founded by the bishop Juan de Palafox y Mendoza in 1646. It is located in the historical center of Puebla; it is a historical Mexican monument since 1981 and 2005 was included by UNESCO as part of the Memory of the World Program. It was the first public library in America.

In 1646, bishop Palafox donated his personal library, composed of five thousand volumes, to the San Juan Seminary, but he claimed that apart from the clergy all the people interested in studying could consult this library, therefore, he wanted his library to be open to all the people and not only to the clergy and seminarians… this was a condition for his donation.

The Palafoxian library of Puebla, the only one that nowadays has an unchanged European testimony in America, its main objective is to ensure the access to all the information written in more than 41000 books and manuscripts, which are part of a well selected bibliographic collection that encompasses from 1473 to 1821 (19172 registers).

The document collection donated by Mendoza was composed of books of several topics, that reflect his diverse spiritual formation thanks to his studies in different universities like Huesca, Alcala and Salamanca.  There is a huge variety in the subjects he covers in three level such as: bibles, sacred history books, canon law, theology and dogma, sacred oratory, council collections, ascetic and mysticism, fathers and doctors of the church, liturgy, ecclesiastical discipline and controversy, natural history, humanities, geography, grammar and dictionaries, classical and poetic authors, physics, mathematics, among others. Therefore, there can be found authors like Seneca and Santa Teresa.  The document collection is rich in languages as well, due to there being approximately 14 languages, for example: Latin, Greek, Chaldean, Arabic, Hebrew, English, German, Portuguese and others. Additionally, when the bishop was in Puebla, he made sure that he had books from the Old World that were about art, vocabulary, trades and singing, and were used to teach the native people. Later on, some books from Jesuit schools were included, like the Holy Spirit and Saint Javier, subsequently to the exclusion of this order in 1767. Francisco Fabián y Fuero chose the historian Mariano Fernandez de Echeverria y Veytia to do the inventory of the Jesuit school in order to give it to the Palafoxian library. It is important to mention that the same bishop donated his personal library and then some donations from Manuel Fernandez de Santa Cruz, Francisco Pablo Vazquez, Francisco Irigoyen and others.

Afterwards, the document collection of the Palafoxian library reached more than 45,000 books. However, it is said that the number of works is much more because there are a lot of printed sheets and bind sheets about many different topics. There are 9 considered the most important books, the oldest book is “Herodoto” printed in 1473, the next oldest book is “The city of God” by Saint Agustin written in 1475. “La Cronica de Aragon” by Fabricio de Vagad and “La Cronica de Nuremberg” by Hartmann Schedel, which is recognized for having hand-made engraved decorations increasing the beauty of this book. The rest  of the books are “El Tratado de las Fiebres”  by Angelo Politani, “Summa Total” by San Antonino de Florencia, “Sermones” by Jacobo de Vorágine. However, other books also have great beauty and incomparable value. It is important to mention that the Palafoxian library has works like “De humani corporis fabrica” by Andres Vesalio, “El Atlas” by Gerardus Mercator, “El Quijote” by Miguel de Cervantes, “La Monarquia Indiana” by Juan de Torquemada and “Fables” by Jean de La Fontaine.

Each one of these books are saved on shelves covered with wire, they preserve their history, without taking into account the subject they are about, they have characteristics that distinguish their authors. Consequently, the book plate from the printing house is the first thing to notice a first sigh as well as the different styles and types, binding, engravings, watermarks, etc. Similarly, the book plate from the owner of each book can be noticed, like the notes. This is possible thanks to the restoration done after the earthquakes in 1999 that cause some damage to the library.

Memory of the World

The Palafoxian library was founded in 1646 being the first public library in America, and has preserved its tradition of intellectual cultural European heritage. It strives to keep an alive connection with the society that saw it from its beginning and to integrate itself to the universe of information with other similar institutions from other parts of the world through modern techniques like internet (www.bpm.gob.mx).The Palafoxian library is open to the share necessity of knowledge.

The importance of this unique patrimony should be established in the scientific worldwide community. The library has been located in the same building since 1646 and it is the only one existing in its type. The creation of a website in March 2003 offers direct communication with the library, virtual visits, presentations, the institution history, a complete catalogue, as well as some information about the current projects and in the future.