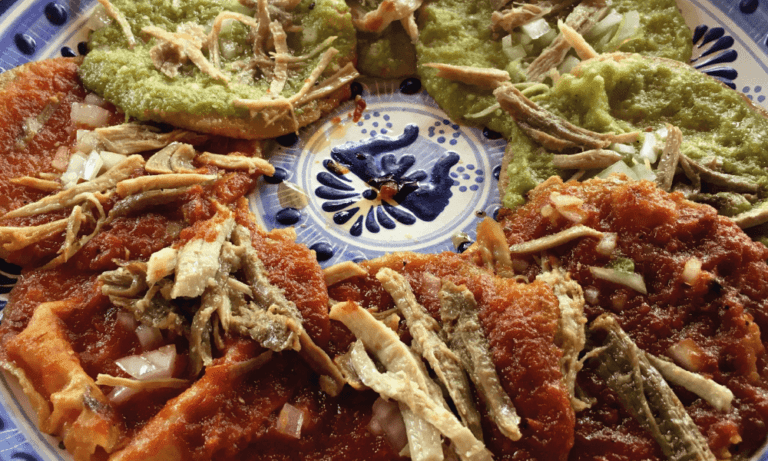 The chalupas are one of the most traditional cravings from Puebla and they are eaten especially during the weekends or as a typical dish for the Mexican Independence celebration.

This dish consists of a small tortilla fried in oil or animal fat, and, after that some green or red sauce is poured on it as well as some shredded meat and diced onion.

Currently, they can be found in restaurants, fairs and outdoor-festivals, usually an order of chalupas includes four or five of them.

The origin of the chalupas is not clear yet. According to history, this recipe was invented by the monks who used some chicken and mixed it with some dough. However, they felt that this mixture was a little dry and that is why they added sauce and slices of onion.

The word chalupa comes from the name given to the small narrow boats or canoes, that the indigenous people from Central Mexico called “mexicas” used in order to sail through the canals and also through the manmade small pieces of land surrounded by water known as “chinampas”.

Some people claim that the spreading of this tradition started near the river bank and course of San Francisco which was located in the city center of Puebla. The name was adopted by 1930 and in fact its origin is Basque coming from the word “txalupa”.

Apart from its origin, the chalupas have been established as a representative craving not only from Puebla but also from the Mexican gastronomy since it has become a traditional dish in the states of Hidalgo, Mexico City and Guanajuato.

Boil the tomatoes for 5 minutes. Remember you can use the same saucepan, then strain them and let them get cold.

Blend the green tomatoes, coriander, half of the onion. two garlic cloves, chilies, salt and pepper.

Wash and rinse the blender.

Blend the tomatoes, chili, half of the onion. two garlic cloves, salt and pepper.

Make small balls of approximately 3 centimeters diameter flatten them and make small tortillas, then, fry them in animal fat.

In each tortilla pour some sauce, shredded meat and some onion.

Your chalupas are ready to eat. Enjoy them!